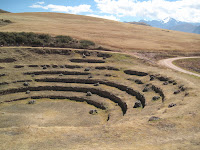 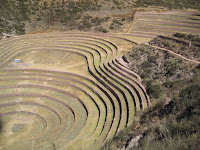 The Incas were brilliant farmers.  Despite the high altitude and harsh conditions, they managed to grow enough crops to feed a population of over 17 million.

The Moray crop circles shown here were an experiment in farming. By using these circles going deep into the earth, at the various levels going down, the Incas were able to grow crops that would normally need warmer climates.
In Moray Peru, the Incas experimented in growing different crops. They used irrigate, concentric circular terraced farming methods. They would plant their rainforest crops at the deepest level, then the coastal plants and at the highest elevation where the climate was drier and colder, they would plant the high mountain crops. 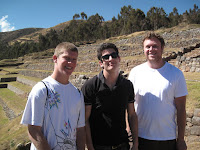 Rand noticed that the crop circles were built in natural sink holes and noted that there are deep earth thermals that add extra warmth to these crop circles.  The Incas also imported better soil from far away to use for their farming.  It helps to get things done when you have the power of the masses to help out.
Tweet